Waddling to the Top

Waddling to the Top

It's That Time of Year Again!

If you are interested, there's still time to sign up and last I've seen almost 50 competitors are ready to take on the Red and Blue courses at Putt U. If you are interested in what goes into playing a U.S. Open you can go back through my posts from playing in the 2015 tournament in North Carolina. 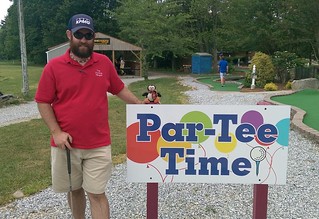 It was an enjoyable weekend
Unfortunately, it's been months since I've properly picked up a putter so I'm fairly out of practice at this point. I'm also one of the few competitors who haven't made the trek to PA to play at least one round on the courses. That doesn't bode well because the courses look hard and, from what I hear, are hard!
This year's tournament will be 6 total rounds, starting with 2 on the Blue course Saturday morning, followed by 2 on the Red course Saturday afternoon. One more round on each course Sunday morning will wrap up the play. In case you are keeping track, that's 36 holes I need to figure out in about 2.5 days of practice I'll have once I arrive on site in May.
In looking at the positives I see 3 things:
1) The longer holes will likely mean less consistent aces, pushing more people into two putt territory. (Seriously - don't think this is easily aceable.) My tournament weakness tends to be consistently dropping aces so maybe I can hang in there more if my 2 & 3 putt skills are put to the test.
2) A shorter tournament tends to mean people are more bunched up in the standings. A 10 round tournament allows people to separate more with 3-4 good rounds. A 6 round tournament keeps the players closer, which is good if you are trying to crack the top 25 for money.
3) I'm generally pretty good at picking up how miniature golf holes play, which probably comes from playing 100+ courses in the past 15 years. A well maintained, tournament course such as Putt U will also have less variables in the holes (poor design, poor maintenance, etc) so once you get a shot you're pretty sure it will remain that way 99% of the time. Consistency is good.
My goals before I get to the tournament in May are pretty simple - get some putting in! Just like last year we'll be documenting our journey here. If you are interested in knowing more about the U.S. Open or playing in a major tournament in general, don't hesitate to reach out to us. Happy Putting!

Done for Another Year


While not the result I was hoping for I can't complain about my finish at the Farmington Miniature Golf tournament this year.  I carded a 40 in the final round, with five 3s and one ace.  While it was a respectable round, I could have done with out the two 3s I took on what should be rather deuce-able holes. However, it was still my personal best at this tournament (previously was a tie for 4th) and I'm quite happy to have taken away the bronze.  I earned $50 for 3rd place, bringing my career total earned in tournaments to $1,860 over 37 professional tournaments.

Upper tier winners from Right to Left
One thing I failed to note about this tournament is that it plays slightly different than most tournaments in the US in that the play on a hole is similar to how you would play with a group of friends.  Instead of each person "holing out", everyone takes their tee shots and then play follows with the closest to the hole then finishing up their putts.  This does put you at a bit of a disadvantage if you lose honors on a hole and have to go to the back of the 3-person bus.  I had it adversely effect me on one hole where I bounced off another ball, leaving me with a much more difficult second putt (that I made) but overall it didn't have that much of an impact on me.
The other unique aspect for this tournament is that they split the field into an upper and lower tier after the first day of play.  This gives some of the more casual players a chance at winning money.  It worked in the Putting Penguin's favor this year as Mandy finished 4th in the lower tier, ensuring both our players were winners! They also give out some minor prizes for certain aces and a raffle for first-time players (a good excuse to give this tournament a try). 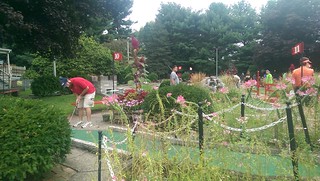 Putting on the well, where I took a 3 each round.  It is ace-able.
Recapping the predictions: 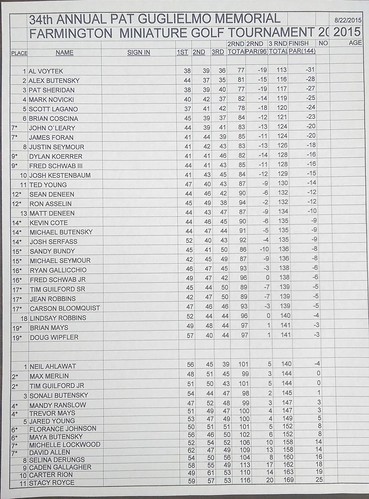 Final scores from the tournament
While there were five USPMGA players in the tournament this year, only two of them made the upper tier top five, proving that in local tournaments those who know the course best have a great chance at beating the pros. Next year is the 35th anniversary of the tournament and they are planning on having a special trophy to celebrate the occasion. Seems to me like it would be a good time to give a minigolf tournament a try if you haven't played in one before! 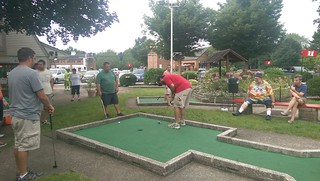 Finishing up the tournament with a two putt


I was way off on my first prediction of the Farmington Miniature Golf tournament (acing the first hole I played - I got a 3) but what I couldn't have predicted is even better.  After the first 2 rounds of play today, I shot a combined 77, which is good enough for a first place tie heading into the final round tomorrow morning.  I felt I played fairly solid overall with six 3s, one 4 and 3 aces, the rest 2s across the course. 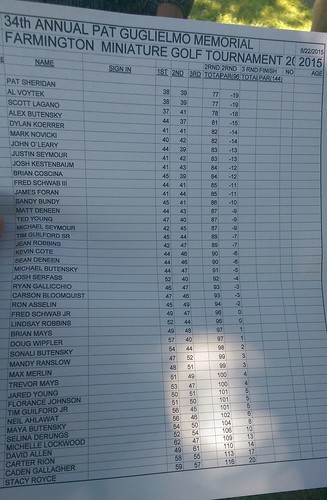 Scores from the first 2 rounds on Saturday
The conditions were great for minigolf this morning.  The course had dried some since the rain last night and it was sunny with the hint of a breeze. Over 40 people are playing in the tournament this year, which is a great sized crowd.  As you can see from the scores, it's tight in the top three places and 4th through 6th still have a shot at catching up to the leaders. 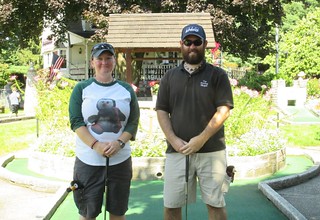 Team Penguin representing!
Team Penguin is also very close to meeting most of my predictions last night.  I already had one round in the 30s and Mandy only needs 1 more ace and me 2 more aces to get those predictions right.  We all know she can fire a great round tomorrow as well and hit that score prediction!
I attribute my success today to the playlist I selected for the car ride this morning (Shoot to Thrill, Thunderstruck, Come With Me Now, Timber, Creepin, I'm Shipping Up to Boston, Jump Around, Sandstorm) so I'm going to run with that same list tomorrow morning along with a bit of coffee. The weather for tomorrow is calling for scattered thunderstorms but it looks like it will hold off until after we're done playing.
Here's to a night of rest of some great putting tomorrow!

Things Have Gone a Bit Awry...


Things have been interesting on the build up to the Farmington Miniature Golf Tournament.

First - we did have a winner for our contest but an unfortunate conflict arose and Dave won't be joining us on the mini-links this weekend. However, he has assured us that he will be pushing our brand as much as possible until he can make it to a tournament.
Second - we played a second practice round last week and it was....not as good as it should have been.  We were well over par!
Third - I haven't been around all week so practicing has been a challenge.  But I found a way to get some putts in while travelling internationally this week.
Finally - Mother Nature was trying to have a go at us with a day remaining until the tournament but the rain stopped and the clouds parted enough for us to get in some practice rounds today and to look at how cute the course cat is. 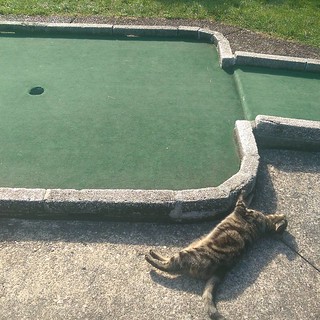 Even minigolf bows to the power of cat pictures.
The scores weren't too phenomenal but Mandy dropped a 41 in the first round (beating me) and John logged a 39 in our second round (also beating me).  I was good for 3 straight 43s, which definitely can use some improvement.
All told, that was five rounds of practice on this course over a span of about 5 months.  I'll definitely squeeze in at least one more before tee-off at 8am tomorrow.
My tournament predictions:
It remains to see how the course will play tomorrow because of the weather conditions here in Connecticut. The forecast for tomorrow morning seems to be mostly cloudy turning to some sun so the course might be a bit drier than it was this evening. We look forward to seeing everyone at the tournament tomorrow and good luck to all!

We have a winner!


In case you missed our multiple Facebook posts, we were running a contest to see who would be the first person to be officially sponsored by The Putting Penguin to play a miniature golf tournament.

Now we're happy to announce the winner of the contest and the person who will be playing on our dime at the upcoming Farmington Miniature Golf Tournament.
His name is Dave Warner and hails from Naugatuck, CT!  Dave's bio:
"Hi, my name is Dave Warner and I am looking forward in meeting some new faces, checking out some of the great miniature golf courses that are around and check out a new competitive game that I haven't played. I have played golf for over 30 years and love the game! I also play steel tip darts for fun.
I moved back to CT about a year ago after living in Green Bay, WI and San Diego, CA in the previous 10 years. Family is very important to me and being back near them has been great! I look forward to seeing all of you at the tournament!" 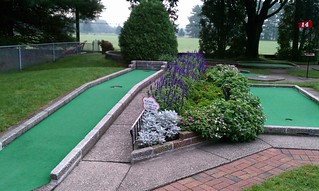 Dave's going to need to drop some aces on this hole to be in the running.
We're extremely excited to be bringing someone else into the tournament fold and we hope this is a great experience for Dave so that he plays in more tournaments in the future.  We'll be tutoring him best we can prior to the tournament! 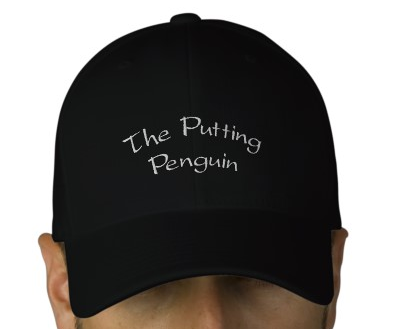 Dave will be sporting this fine cap for us during play.  You can buy your own for the course.
As always continue to look towards this space for further updates on our practice and some results from the tournament.  Happy putting!