Treasure Island is one of several pirate themed courses in Myrtle Beach, including it’s sister course Spyglass.  Unfortunately it doesn’t really stick out among the other courses when it comes to play or experience.  There is only one course on the property and it does work its way through a good change in elevation, giving you a sense of exploring an island.  However, there isn’t a ton in the way of theming throughout the holes except for the plaques.  The exception to this is the back nine that has some obstacles/edge of the courses that are done like old house/fort “ruins”, which is actually something we haven’t seen in other themed courses.

The holes themselves are a little more unique than a lot of the adventure style courses in the area and they make good use of the rock sides and water features, again making you feel like you are putting on a pirate island.  There’s a good mix of longer holes and short, more aceable putts. In our first play, the two of us were collectively 3 over the par 36 and if we had played it a few more times likely could have broken part without much effort. The signature hole is #9, which is a very long downhill putt where you run past the hole and trickle back off the slope in the back.  There’s a little complication in the way the ball might hit off the rocks under an overpass that cross about halfway through the hole.  If there’s no one waiting on you, it’s a fun hole to try a few times.

The course looked to be in good condition, even after a couple days of wind and rain. There is plenty of space between two holes and in other places they might have crammed 36 holes into the same footprint, and there’s nice brick pathways between the holes.  When comparing it to other courses available to play in Myrtle Beach, the total experience would not put it at the top of the list.  However, it’s worth playing if you are looking for variety in courses or if you are staying nearby (which we were) as you won’t feel disappointed that you played. 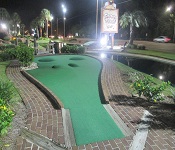 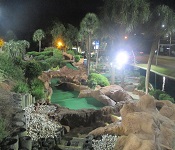 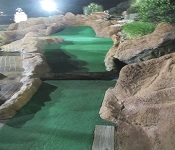 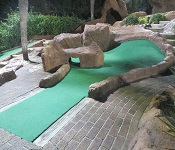 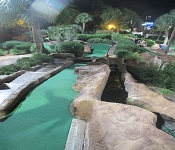 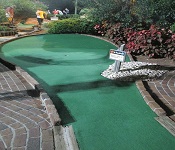