Taber’s is a Harris course that sits with a beautiful view of Lake Auburn.  It is one of the more picturesque courses that we have played, especially in Autumn as the leaves were changing color around the course and the lake. The course has some common Harris course features such as decent spaces in the breaks to create cracks and metal cups, both of which can add some challenge to the play.  There is a good mix of hole designs here with most of them forcing you to think anew when you step into the tee area.  That being said there’s also a few common Harris course designs throughout the course, such as the wrap-around hole.  On first play-through the course can be challenging as there’s not a lot of easily determinable ace shots and quite a few tricky deuce putts on some of the holes.  However, if you play it a couple of times over you’ll get the lay of the land and a score around par or slightly over will probably be seen by most returning players.  We first played this course as part of the 2020 Taber’s Fall Classic and were able to get some below-40 scores during some rounds but it won’t be a regular thing for most casual rounds.

The course was very well maintained and after a decent amount of rain it drained well.  There’s a lot of interesting wood sculptures and art throughout the course to add another visual aspect while playing, and one that is very inline with its Maine setting.  There is plenty of space between the holes for when it gets crowded and a decent amount of shade for those hot summer days. Overall it’s a solid course to play when in the mid-Maine area. 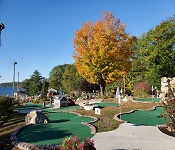 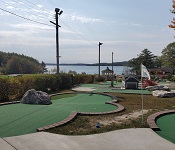 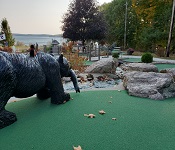 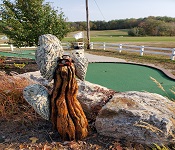 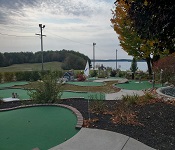 Tabers is on a very scenic plot, overlooking Lake Auburn. A venerable lakeside stand now featuring ice cream and savory grilled and fried food, the mini golf course was remodeled by Harris in 2015. A waterfall feature greets people at the end of the first hole, and the river feature flows throughout the remainder of the first nine holes. Under par rounds are certainly possible, but it's not an ace factory. That said, it's not too tough to trip up newcomers and novices. Judging by the steady traffic throughout the summer, it's been well-received by the community. 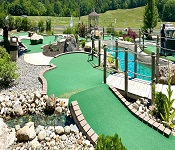 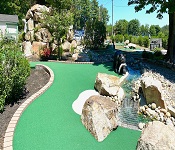 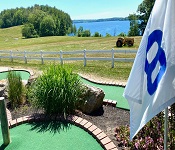 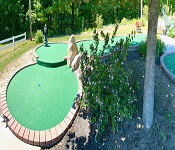 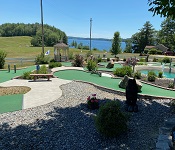 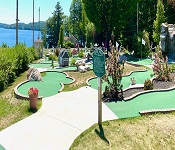