Spy Glass is one of several pirate themed courses in Myrtle Beach, including its sister course Treasure Island.  Unlike Treasure Island, which sort of blends into the background of generic pirate courses, Spyglass does a lot more to immerse you in the pirate theme.  The course winds around “Long John Silvers” mine and does a good job of leveraging the terrain from extending out into the water, going up and down elevation and then getting you actually into the mine section of the mountain.  It puts you on the pirate ship with a couple of holes and also integrates what resembles a conveyor belt that you might see moving product from the mine.  Along with pirate decorations throughout the course there’s also some audio/visual aspects with “cannon balls” splashing down in the water from time to time.

The holes are easy in general, with the par 36 being well in sight even on a first play.  There’s a couple holes that might sneak up on you and steal a stroke but there are plenty where you can gain it back with an ace, especially if you play the course more than once. Even the more “gimmick” holes, such as the ones that utilize the pirate ship, are fairly easy to get a deuce on with a good first putt. Most of the holes are straightforward putts not requiring much banking, which is good as the edging is rock and not brick or wood. Even with that consideration, there is good variety in the type of putts you must make and how you the hole and combined with some of the more elaborate  designs, makes for an engaging 18 holes.

Similar to its sister course there was a lot of room between the holes and you got the feeling that another course might have tried to put 36 holes within the same footprint. While the night we visited wasn’t too crowded it was still nice to not be on top of people as we came to a hole. While this isn’t the flashiest course in Myrtle Beach, you won’t be disappointed in playing it, especially if you are looking for something that is both fun and can be properly competitive with the style of holes. We would return to play there if given the chance. 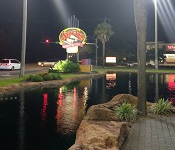 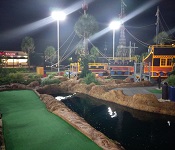 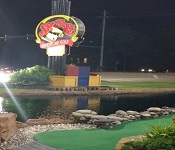 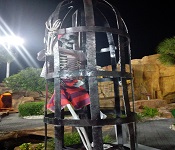 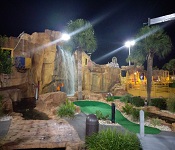 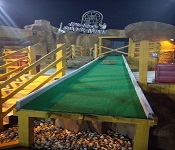