After over 170 courses played by us we encountered a first here when there was the option to feed the alligators prior to the first hole.  Naturally one of our group took advantage of the opportunity and while it ultimately didn’t have any impact on the course play it was a fun addition to the round and is an example of a way an otherwise “familiar” course can set itself apart from others.

The course itself is your general pirate theme similar to the Pirate’s Cove franchise.  It starts off very well themed, with the first hole on a pirate ship, but peters off a bit as the course goes on.  There is good signage for the hole though, showing what might be a “preferred” path to the cup. The course uses the space it has well and has some pretty good changes in elevation with a nice view from a couple of holes and a gazebo at the top.  It was a very hot day when we played and while we all needed a cold drink at the end, thee course did provide a decent amount of opportunities to get out of the sun.

The holes don’t offer a ton in terms of creativity but they did have a good mix of ways you had to think about the tee shot even if the designs weren’t overly unique.  Many of the holes are aceable which accounts for the low overall par, though our group all came in over par (in part because of the sweltering heat).  The easiness of the course likely factors into the course’s choice of seeing if you won a free game. They have an 18 side die they roll at the end and if you got an ace on the hole that comes up on the roll, you win a free game.  Despite us having 1/6th of the holes covered we didn’t win, but they do give you a coupon for a $1.00 off another game anyway.

A couple other items to note on this course such as you can get an adult beverage at the end (don’t believe you can take it on the course though we didn’t ask) and they have a variety of merchandise including the first minigolf koozie we’ve seen. Surprisingly, on the Gulf side of St. Pete there aren’t a lot of miniature golf courses so this course is definitely worth the play if you are out spending the day at the beach and it isn’t a far drive/Uber ride to get there from the downtown St. Pete area. 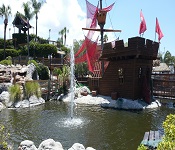 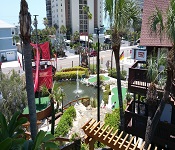 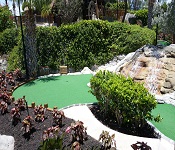 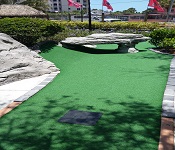 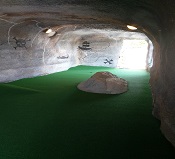 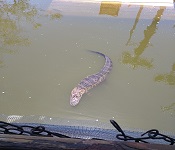 See pictures of all 18 holes in our Flickr album.