This miniature golf complex is part of the LA parks department and features three courses, although only two were open on the day we played. This is probably one of the more difficult courses we’ve had to review, simply because it came after filming Holey Moley.  A group of us contestants, affectionally named Club Putt When Ready (made up of A Couple of Putts, Minigolf Queen and Randy Rice), went out the day after losing in the competition so we were exhausted, a little bummed, but also excited to be “recovering” by playing minigolf.  So it wasn’t quite your typical mindset when jumping into a few rounds of putting.

The courses here are all of the poured concrete variety which allows for them to more easily make longer holes compared to ones that use rails, bricks or stone.  There are very few “short” holes here so aces are at a premium given the length of the holes and the fact that there was rarely a true straight putt to the hole. The multi-tiered holes had some issues with the pipes in the way they kicked out the balls and the carpet in places was in definite need of repair, so that all added to the difficulty in getting a low score.  However that didn’t mean that average scores weren’t achievable since not a ton of the holes required too many complicated putts given their layout. While many of the tee shots were similar across the holes and the courses, there wasn’t too much repetition across the 36 holes we played in terms of hole designs so that did keep us engaged through two rounds.  We felt like course 3 was a touch more difficult in the hole designs.

Overall there isn’t a ton of theming in the course other than a few of the multi-tier holes and the themes don’t seem consistent either throughout the course or with the “castle” setting of the complex, so the play on this course ends up being pretty average.  However, given there are not a ton of options in the greater LA area and the price is very reasonable for a round near a city, it’s a complex worth stopping by to get your putting fix in, especially if you are looking to play more than one round. It’s also open pretty late all throughout the week which is always a plus if you’re trying to sneak in some games after work or while traveling. 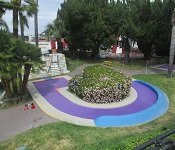 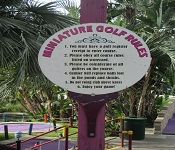 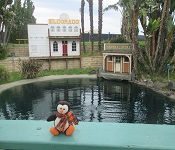 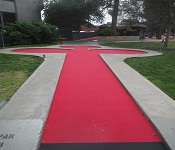 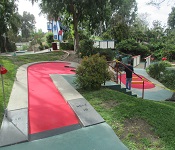 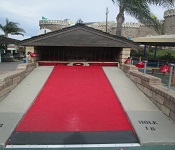 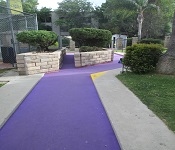 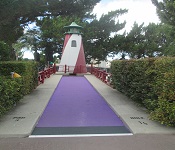