By the time we got to visit Putt Shack, a few months after it’s opening, we had visited almost 200 miniature golf courses and we can safely say this is the most unique overall experience we’ve had.  It’s not the “best” course we’ve played but it was one of the most fun, especially with the group size that we had (10 people) and earned it’s high scores. The group behind Putt Shack first brought the world Flight Club, which is a high-tech darts experience, and a lot of the features we saw in play when visiting that had elements on the course.

There are 4 courses at Putt Shack (Ruby, Emerald, Sapphire and Amber) and it looks like there are two copies of each set of holes.  When we played only 2 were running and we don’t know if there are points where all 4 are up or they use them to rotate through for maintenance, etc.  On our trip we played Ruby and Emerald.  You can either sign-up when you get there or do it ahead of time online and once there you sign-in and enter you group names (up to 5 people in a group) then wait and watch your name on the board (ala an airport departure board, very similar to the one at London Heathrow), which tells you to either hag a the bar or head to the tee.  Once at the tee you get assigned your club and your assigned ball, which has been digitally tagged to you.  This is very cool since not only does it detect who is going on each hole but should you need to skip a hole because of wait times, automatically follows you to where you play.  For anyone who has teed off at the Top Golf driving ranges, it’s a similar concept to their tagging and scoring.

At each hole there is a tee mat where you place the ball, wait for it to register and then you get one minute to play the hole.  It can feel like some pressure but it’s more than enough time to play each of the holes. While your strokes count towards your overall score (not based on the individual stroke but by a score based on the stroke count) there are also other features that can add or take away points on each hole, generally based on how risky you are and the style of the obstacle.  It also looks like you get awarded compounding points for each ace you have during the round.  There was some signage that went into discussion of the scoring but we didn’t noticed anything easily available that gave a full breakdown.

At first glance it may seem to reward luck but after playing both courses it does feel like the course both awards skill and provides enough other point options to keep things close across a wide spectrum of playing skills. It was amazing how close the top few were in both of our games, some separated by mere points, given the variety of different point combinations available throughout the holes. The challenges seem consistent between the courses but we found that Ruby played a bit easier than Emerald, although that could have been a result of us being more conditioned to the style of play since that was the second course we played.  Many of the holes also have “ball paths” marked on them to suggest the best way to tackle a particular obstacle/set of curves and bumps.

One of the only drawbacks of their system is that there doesn’t seem to be any take away to help you remember your score or memorialize the winners. When registering we were told we could skip the email address section so perhaps they email you something at the end.  Otherwise there is no scorecard and there is no printout at the end to give you either your stroke or point score, or list who the winners were.  We tried to take a picture but the screen changed over to the next group too quickly when they finished the previous hole.  It would be great if there was in integrated app or even a print station when you were done.

While the course is still fairly new, everything was in pretty good shape with the exception of one hole’s obstacles that weren’t working. With a lot of people on the course things are a little tight between some of the holes and while there are some markings to show which hole is next, sometimes it was easy to get turned around when you were enjoying your time with friends. We brought drinks on the course from the bar so we didn’t try their on-course service but it looked like other groups were getting what they needed in a timely manner. We also didn’t have a chance to try the food at this venue.

The pricing is a little steep for nine holes but it’s consistent with other venues like this that we’ve visited and the off-peak pricing is much more reasonable if you can make it to the course then. We highly recommend checking it out to experience the technology and if you can do so with a group then we feel like you’ll get the true entertainment experience they were going for. 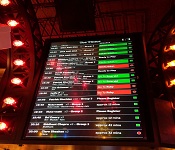 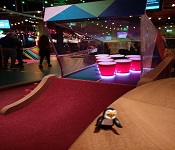 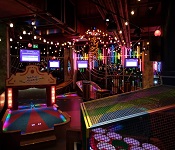 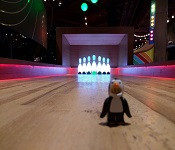 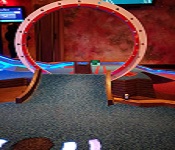 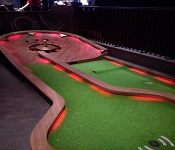