If you’ve played one “older” Putt Putt course you pretty much know what to expect from any Putt Putt course – no general theming (other than the “Putt Putt” theme), holes with very few features and designed for aces (if you can figure out the lines without help) and a lot of orange paint. This course was no different.  We’re also not sure how old this facility was but it definitely had the air of serious age, which in some ways did add to the overall atmosphere.  The signage, lighting, clubhouse, all brought with it a sense of being from the 60’s.

One of the great things about this facility is that there are 4 different courses to play and the cost structure is very reasonable if you want to play all of them.  We only had time for two but paying less than $15 for 4 rounds of minigolf is a deal any day of the week. The staff was very friendly the night we were there, even showing part of our party how to play a particularly tricky hole, and they had music playing throughout the night.  The scorecards are one of the few where we’ve seen that the rules are that players finish the hole before the next player starts, similar to tournament style play.

We also caught the course early in the season so they were only halfway through a repaint of all the rails (and they not-to-subtly had all the paint cans stashed behind a bush in the middle of the course), so some were shiny and new and others looked very worn.  In addition many of the carpets were showing wear or water damage and were probably in need of a replacement.  We weren’t sure when the last time the “water hazards” had any water in them but judging by the design they were probably better off without water lest they turn into mosquito pits. But other than the lack of water and the wear, the course was very clean and maintained.

Our overall recommendation is that this course is great to play in the area, especially at the price they are charging.  We’d definitely play in their league if we were around there and can see having many competitive rounds with friends there.  However, as a destination miniature golf course it doesn’t have much to offer so we wouldn’t suggest you going out of your way to play it. 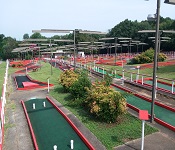 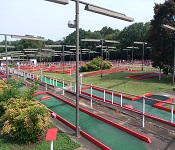 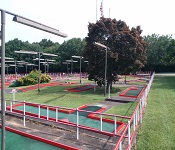 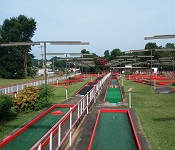 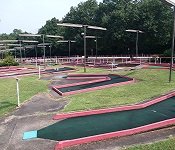 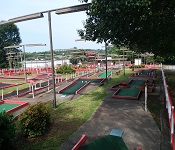 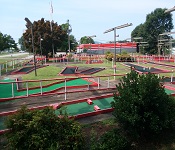 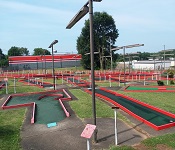 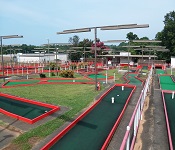 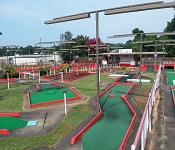 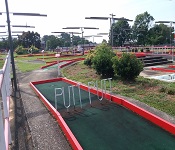