The Professor Hacker’s courses are part of a nationwide chain of courses and the size and grandeur of this course fits into the overall Myrtle Beach minigolf vibe. There are two courses on this property with the gold course primarily taking you through the front and right (as viewed from the road) and the diamond course taking you through the back and left.  The courses are fairly similar in style so if you don’t have time to play both you won’t be missing out on a whole lot.  Both courses have a handful of metal cups (though strangely not all of the holes have them), which is a longstanding pet peeve of ours and did cost us a stroke or two during the rounds.  The holes are a mix of shorter, straightforward ones and longer, but still fairly easy to figure out, holes and overall a lot mirror similar holes that you would see on some of the other Myrtle Beach courses.  There’s very little use of obstacles although the diamond course did incorporate a handful more of themed obstacles than the gold course did.  Both courses tell a story through signage along the way and while there’s a lot of good decorations (a village, monster skeleton, plenty of mining stuff), none of it really makes it way onto the holes proper the way some courses will incorporate a theme.

A frequent minigolfer will have no problem navigating a lot of the holes and we shot well off the bat, coming in just over par on gold and then well under par on the diamond course, which is definitely the easier of the two (and more like 3-4 strokes versus the 1 stroke that the pars imply).  There’s not a lot of tricks to them and if you were to play the same course more than one you’d likely easy drop a couple additional aces.

That all being said, we did enjoy our time on these courses.  You have the option to take a train ride up to the starting holes of the courses, which we did once, opting to take the stairs for the second course.  The train cuts through both the courses so it’s fun to see people heading off to their journey as you are playing through the course. Since you start from the top, the time on the course is spent winding your way down to the ground floor and there’s good views of the course from several of the holes and it allows for some good elevation changes to be incorporated into the holes as well. The course was in good condition and very clean, with a good amount of space between holes in case there’s a lot of people on the course.  It was pretty empty when we played so we got through both courses pretty quickly.  The price is on par with other courses in Myrtle Beach and it mostly delivers on the size and scope you’d expect from a course here.

The course is just up the road from Hawaiian Rumble so it would be a good pairing to play both of them in the same trip.  While it doesn’t reach above the other courses in Myrtle Beach, we would play there again and would recommend it for folks, especially if you are staying up in the North Myrtle Beach area. 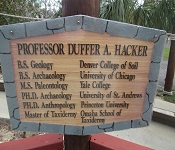 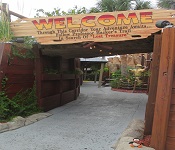 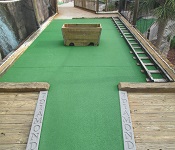 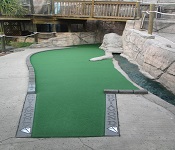 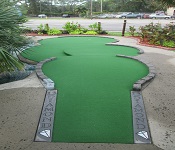 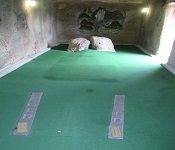 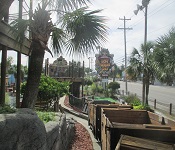 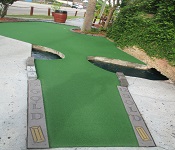 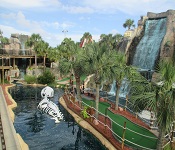