This is the first time the Naugatuck Library has done a minigolf charity and they hired Library Mini Golf to create the course for the event, which is a company that does many of these courses throughout the country.  The course was presented on two days, with one day being an “adult” tournament with refreshments and the other day being the family tournament.  The course actually wasn’t what we were expecting as many of the holes were much longer than normal, with several winding their ways through multiple library stacks.  As a result the scores were quite high and much of the putting was more of the “whack it as hard as you can variety” versus more precision putting.  The holes also didn’t incorporate much else “library” as there were few holes that used books or other library items as obstacles.  One hole seemed to be a bit poorly designed with a horizontal loop right from the tee which didn’t leave much speed for the ball when it was done.  However, hole 10, which was a fun pipe down the stairs, was an aceable and entertaining hole.  You even got a small prize if you got an ace!  The course also did cover both floors of the library so you did get a tour of nearly the whole facility.  The hole variety wasn’t as creative as other similar events we’ve been too but the difficulty level was higher and overall the cost, and the fact that it was for charity, didn’t make it seem like a waste.  We would likely play again if they held the event another year. 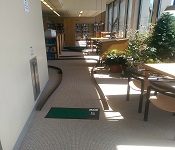 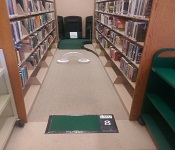 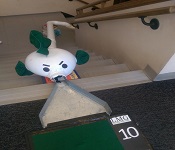 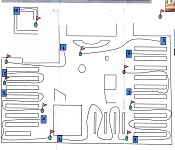 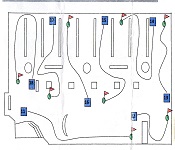