This course is amazing!  Huts, torches, indoor, outdoor, water, Loch Ness monsters, minotaurs and dodos, it has it all.  The theme of the lost city of Atlantis is used throughout and it actually feels as though you have been transported there.  This course tackles many of the popular myths (UFO’s, etc) as well as adding some of its own (the evolution and devolution of the minotaur species).

Both courses start out indoors and intertwine as you move outdoors.  They both also move up and down the multi-tiers of the course (you get about 3-4 stories in the air) visiting various huts and caves on the way.   The soundtrack is excellent and follows you throughout the course.  The par is shown in diagrams at the hole, as the pin placement can change.  The covers for the non-used holes do not interfere with play at all, as they do at some courses we visited that try to move their pin placements.

The hole designs are some of the most creative we’ve seen, even if they are really easy.  It is nice to see something unique.  The 17th hole of the minotaur course is even a maze.  The best hole is the last (19th) hole  (see pictures).  It is practically impossible to putt across this narrow strip in the water, but if you do, you get a free lifetime pass and your picture on the wall.

The only problem we had with this course was that the ceiling was crumbling on the indoor part of the course.  This course comes with the highest recommendation and it is as must play stop when vacationing at Myrtle Beach.

Excerpt from the scorecard:

“At 2:37 pm, March 29, 1998, a land mass suddenly appeared some two miles out to see from the Myrtle Beach Pavilion.  Two days later, the mass had settled itself atop the old Chapin Company department store, two blocks from the ocean.  You’ll find out how this literally-incredible event occurred.  You will laso see unimpeachable evidence that the mass as a miniature golf island resort, some 50,000 years old, which had broken away from the sunken continent of Atlantis and inched its way to the United States over thousands of years.  With your own eyes you’ll see the electrifying evidence that is completely revising the history of ancient civilizations.  This evidence incontrovertible proves many ancient legends to be true and certain modern mysteries- UFOs and the abominable snowman, etc.- are well-founded and probably real.”

The Putting Penguin reviewed this course quite some time ago, and we loved it at the time.  That feeling still holds generally true, though the passage of time appears to have taken its toll on some portions of this course since we last played. Overall, Mt. Atlanticus is a stunning mini golf experience.  Two 18-hole courses (Minotaur and Conch) wind through interior spaces and up a mountain that’s at least four stories high.  Along the way you follow footprints of mythical creatures around watercourses and into caves.  There are artifacts from ancient lands along the way to view.

We played the Minotaur course.  The first few holes are inside.  Though the course is generally in good shape inside, the mats were worn a bit, and the ceiling was in rough shape.  Paint chips and ceiling fragments were even falling onto the course.  One particularly nice aspect of the holes inside was the practice greens.  The two practice greens provide a great way to pass time if the course is crowded and gives serious players a chance to warm up.

Once we were outside the course vastly improved.  Many of the mats looked new, and the maintenance was notably better.  The water was clean and running swiftly.  Coy were plentiful and colorful.  There were few obstacles actually on the course, rather the hole designs used a lot of curves and bumps to challenge the player.  As a whole, though, the course is not overly challenging to players of any skill level.

Overall the space between holes not only gives players a feel for exploration, it leaves plenty of room for waiting on a crowded day.  Benches were available for rest, and that is certainly a welcome sign for some as there are a lot of stairs on this course.  A bonus is that snocones are for sale at Hole 14 on hot days (though it was not open on the cool January day that we visited).  We liked the metal putters and deep metal cups.  There was a satisfying sound of sinking a putt into the metal cup without worrying that it would bounce out.  The tee area was well done; a simple round piece of matting, seamlessly inserted onto the green, and it was a different hue than the rest of the mat.

We would highly recommend this course to everyone visiting Myrtle Beach.  The course is fun and interesting to all ages.  The course is designed so the cup locations can change making this course a good place to revisit on occasion if you’re local.  And good luck on that 19th hole.  If you sink the putt you win free games for life!

We played this course again while in Myrtle Beach and our 2015 thoughts are still generally true.  The carpet wear throughout the course was a little more pronounced this time and there were some spots where there was heavy water damage. The hole signs have also seen better condition and it was hard to even tell that they were supposed to show a layout of the hole. However, the play of the course didn’t seem to be impacted too much as our scores on both courses were under 40 and could have been in the low 30s consistently with some practice on the holes. It still remains highly creative in that throughout the two courses there is plenty of variety in the construction of the holes to keep you interested and the sprawling nature of the course gives you a good chance to get plenty of steps in.  The staff was friendly and the cost to play all day ($14) is very reasonable should you want to take in a couple of rounds in the morning and come back in the evening as it does look good under the lights.

While our atmosphere score has dropped since we first played it, it’s still a great go-to course while in Myrtle Beach.  With a bit of renovation it could move back into the upper echelon of amazing courses in the United States.

See pictures of all 18 holes at both courses and more in our Flickr album. 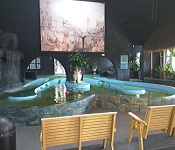 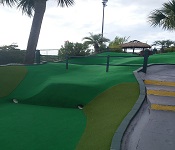 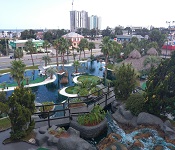 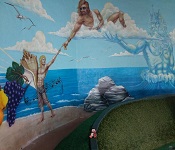 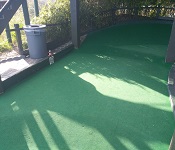 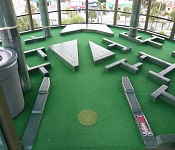 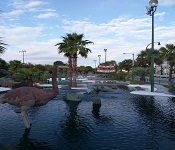 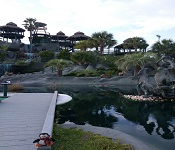 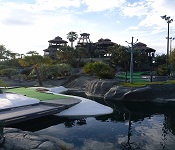