The 2018 British Masters was played on this course, one of two at this location.  It’s a traditional adventure style course with very few obstacles and our least favorite metal cups.  Overall it is a well-maintained course, the carpets were in good condition and there were various bits of theming throughout the course, though most of it was to the side of the holes and not used as obstacles.  However, the dinosaurs were quite large and impressive.  The course uses the rock edging, so on a few holes where a bounce is advantageous there could be inconsistency in what you get.  The holes all have a well-defined starting area and there is plenty of room between the holes for gathering which we saw put to use on the sister course once it got busy with the public at play.

The course itself is a good mix between aceable holes, especially on the front 9, and a few testers on the back nine. While the tournament players used a variety of minigolf balls, you can play the course easily under the course par with just a general golf ball. The metal cups do make some of the second shots difficult both with their lack of forgiveness and some undulations around the cup that make a soft putt almost impossible to sink.

We’d recommend playing this course as it was a good adventure style course with other options including the driving range and snack bar.  It was easy for us to find off the train from London and seemed to be accessible from other parts of the suburbs as well. It reminded us of a lot of courses back home. 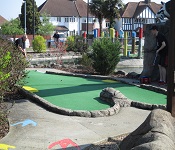 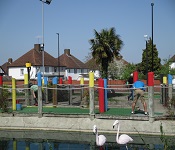 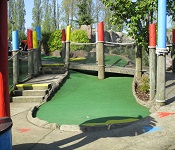 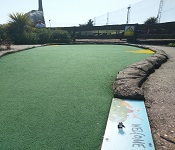 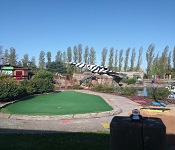 For an album of pictures from the British Masters which show other aspects of the course, click here.