This course intrigued us right from the opening hole.  By the first tee there was an explanation of the two ways to play this course: Challenging Tees or Leisure Tees.  Of the 86 courses we had played prior to this one, we had seen only one other course try to take that approach, however it wasn’t done as well as this course executed it.  The basic premise is that there are two paths to try.  The “challenging” path is marked by a white arrow on the carpeting.  You have to pick which way you are going to play from the first hole and failure to follow the white arrow if you selected “challenging” is supposed to result in a one stroke penalty (though not everyone in the party must choose the same).  We didn’t get a chance to play the “leisure” tees, but we do have to say that the challenging tees are just that and the par for the course seems to be set for those tees as we both came in right around par.  The challenging tees did have several putts that you have to think about, however playing the course a few times will likely result in scores below par.   We also suspect that we would do very well had we played the leisure tees.  The idea itself is great as it allows all level of plays to enjoy the course in different ways.

The course itself is relatively new, and as such it is in very good shape.  The landscaping is well done and even late in the season (end of September) it showed signs of a lot of upkeep.  The holes themselves were also very creative.  In fact, it is one of the most creative “championship”-style courses we have ever reviewed.  There were many holes on this course where we stopped and said “we’ve never seen that before.”  Many of the other holes also had different takes on relatively common themes, and this resulted in an unique design.  If you like obstacles you might not like this course, but if you can enjoy creative designs in minigolf holes, then you’ll definitely want to stop by.  Also, the price is amazing considering it is a new course and that miniature golf prices are on the way up on many courses.

When you do play the course, we do have a couple of words of warnings.  The carpet it rather thick, so it makes judging speed a bit difficult, especially if you are used to thinner carpeting on most courses.  Although the cups aren’t of the metal variety, they are very tricky and you will find yourself rimming out of at least one while you will.  One last piece of advice, on the “rough” and “sandtrap” carpets, the shots are very tricky because the texture of the carpeting is so much different.  Though don’t fret, none of this takes away from the great atmosphere of the courses and its uniqueness.  It’s a must play in .

It’s never fun to replay a course and see it fall from a previous good score.  However, we got a chance to replay this course after 15 years and sadly the previous visitor reviews are still accurate. The course is in very rough condition, especially the carpets, which you’ll note is a significant change from our first review.  They are worn with plenty of rips and tears in them, often in areas you are looking to putt. The cups are beaten up and while we were there on an early May day, the water also wasn’t working.  This lead both to some unsightly scenes around the course as well as interfering with play on one hole that has a part designed to go into the water.  (Note: we did message the course after playing and they mentioned it was under new ownership and replacing the carpet was on the list of improvements.  We’ll be keeping our rating for now but hope to get back there if they are updated.)

Another change was some of the aesthetics of the holes. As you can see in the 2006 pictures, a lot of the obstacles were the classic wooden post style, which gave it a very clean adventure-style look. However, they have now taken plastic fencing and placed it over the wooden beams, as well as adding random colored piping throughout the course. In our opinion, it did not make for an improvement and makes the course seem more “cheap.”

We played the challenging version of the course again and agree with our previous comment that it seems like the par is set for those pathways.  We were all around par and likely would have done a bit better had the carpets been in better condition. One thing we did notice about the challenge side was that one some holes there was almost too much going on.  For example on one hole, the challenge side required a double-level shot versus a straight run down to the hole.  This was challenging enough the way it was set up but then there was a rock at the output of the pipe which made it nearly impossible that your shot would end up near the hole after making the first level. Similarly the only use of a loop on the course then lead to a triple-decker plateau, which on its own would have been enough of a challenge. When you also then add in the layer of deteriorating carpet, you have a situation that could end up more frustrating than fun.

One positive is that the course is still just $5 to play.  So if you have younger kids who might not care about the condition of the course or you don’t want something expensive and you’re willing to roll with the issues, then it is a good value. Unfortunately there’s other good courses a short drive from this one that offer a much better playing condition at this point if you are looking for a better overall minigolf experience.

Reviewed by Pat, Mandy, and Putt 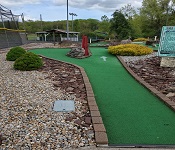 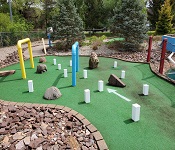 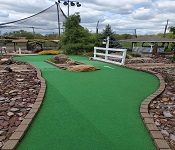 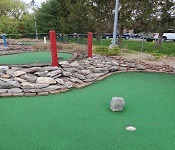 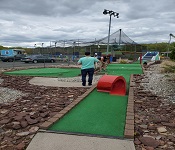 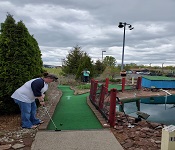 Agree with the last reviewer - this course does show creativity in the layout of the holes but it has fallen into disrepair - seems to be an issue with most courses connected to a sports complex.

This course was wonderfully reviewed in 2006. HOWEVER, a visit there on 8/5/2013 showed that the course is in a badly run-down condition! Most of the running water that makes up the beauty of this course is in terrible disrepair! It is impossible to enjoy the course while looking at dried-up and scum-filled pools. The condition is obviously not a new occurance, and the owner has probably suffered the effect of a bad economy these past 5 years.

Excellent minigolf venue that really does challenge the experienced player while giving the casual minigolf fan a fun experience.  Connected with a driving range and batting cages, the course is fairly easy to find. I played both the 'leisure' and 'challenging' course and didn't see a vast difference in difficulty.  However, the 'leisure'
course does offer a few opportunities to skip the more difficult shots and thus, have a better chance to reach par.

The course is very well-kept.  When I played after dark, everyone in my group commented on the effectiveness of the lighting.  No shadows or unlit areas where you could stumble.  Parking is adequate but the rest room I was pointed to was located in a (noisy) bar that adjoins the property, which may be
problematic for visitors with children. Other than that one caveat, I highly recommend this course to all minigolf fans.  I intend to use it as a practice course to
sharpen my game, as it is more challenging - and interesting -than most.  I was able to lower my score by 6 strokes after playing the 'challenging' course just twice.  I look forward to playing it often.

I played this course last night with my seven year old.  While it was quite difficult, it was not frustrating.  Instead, I found it quite challenging.  All of the holes were unlike I had ever seen.  Because it is new, the greens were in great shape, the stone borders were nice, and the grounds were clean.  My only complaint was that the water in the fountains and small ponds was dirty and smelly.  We live in and usually traveled to the courses.  I'm looking forward to bringing the rest of my family here from now on.  Great course!

Reviewed by Joe B.