We were lucky enough to sneak in a round on this course during a short trip to Florida.  We wanted to play it at night as we heard it’s even cooler to see when all the lighting is on but that didn’t fit our schedule.  The graveyard/creepy theme was right up our alley and the course did a good job of keeping the theming throughout all 18 holes. The course was fairly easy as we both had 3 aces and both scored under par.  An experienced putter could easily have a score in the mid-30s playing it a second time. Despite the ease of the course, the hole designs were fairly creative with a “labyrinth” hole we’d never seen before and a crazy mad-scientist hole on the 18th.

As mentioned, the theme of the course stayed consistent throughout the 18 holes with the graveyard/haunted house designs and little stories on the number posts.  This course also has 6 trivia questions on the scorecard, requiring you to pay attention to different details on certain holes and answering them correctly could lead to some prizes at the end of the round. There were also freebie scratch-offs provided at the end of the round as well.  We won two sets of 10% any of the retail items.

The course would have gotten a slightly higher overall score if it wasn’t for the cost.  While very nice, this is not a $15 course based on our experiences with other, more impressive, courses. It definitely suffers from the overpricing that goes along with being associated to a theme park.  In addition, if you are going just for miniature golf you’ll have to pay the parking fee for the park (unless you want to talk the walk from the outside hotels or resort areas).

On a recent business trip, Pat had the opportunity to play the second course at this complex and play it in the evening. If you have the chance to play it then, it definitely is a cooler atmosphere than during the day!  The second course is about equal in terms of difficulty as Pat shot in the mid-30s the first time out. Like the graveyard side, there is a good mix of creative holes keeping you interested throughout the round.  This includes the 18th hole which has the only “rotating” green around a cup that we’ve even seen.  It makes for one of the strangest putting experiences.  Both courses at this complex are different and entertaining enough that it’s worth playing both if you have the opportunity. 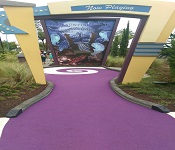 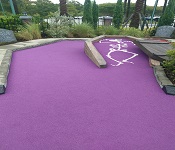 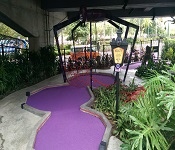 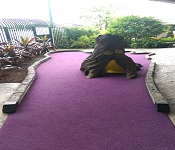 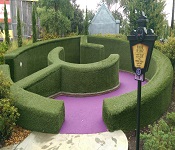 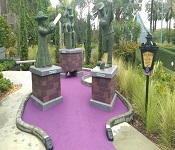 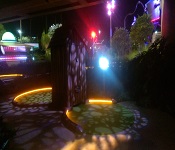 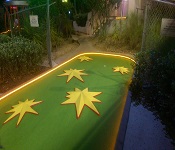 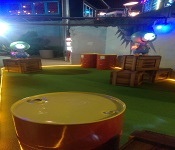 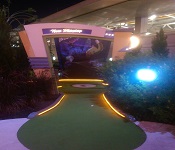 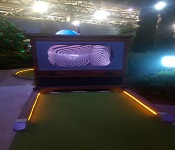 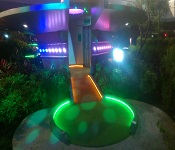