This course is the home venue for the USPMGA Masters tournament and the home of a couple rounds of the USPMGA U.S. Open tournament (www.mastersnationalchamps.com).  The course is billed openly as the #1 rated course in the country.  When it comes to tournament type play, we’d definitely agree with that rating, but we will disagree when it comes to more family/theme oriented play.  Hawaiian Rumble definitely has some of the nicest holes for competition, but in our book Perils of the Lost Jungle in Virginia holds the title of the most amazing course we’ve played.  However, as you can see this course still rated very high thanks to a great combination of upkeep, theme and design.

The holes themselves aren’t anything overly exciting, and for the most part even middle of the road players have a good shot at a two on most holes (hence the low difficulty rating).  The top players will consistently score below par on this course.  The atmosphere is definitely where this course excels, beginning with the parrots they keep right as you enter the course.  They’re quite talkative so be sure to greet them and say goodbye on your way out.  The staff is friendly, the soundtrack is theme appropriate (Beach Boys, Buffet, James Taylor) and you’d get lei-d.  The volcano in the center of the course is quite magnificent on “erupts” on a periodic schedule.  Thankfully, it’s done tastefully and nothing like the terrifying heat-thrower seen on Putts-Up Dock in CT.  The course is quite clean, even after a steady rain and the water (while not necessarily part of any of the holes) flows constantly and in good conjunction with the layout of the course.  The course isn’t as overwhelming and expansive as some of the ones in Myrtle Beach, but it’s definitely worth playing while you’re there.

This course is no longer part of the U.S. Open as that tournament has gone into a wider rotation across the United States but it’s still the primary course of the USPMGA Masters tournament in October.  It’s easy to see why this course is part of that major tournament as almost every hole requires a different approach for an ace shot and many of them are not apparent on the first play through.  We increased the difficulty on this course as the course recently replaced the more consistent brick “paver” style edging for rock sides which makes some of the needed bounces more difficult to manage and even tested the pro’s skill during the tournament.  The hard holes will really test your ace and deuce putts and can quickly escalate to 3s and 4s now.  However, there are still a good amount of easier holes on the course which help keep the scores down and most players should be in the low 40s if not lower.

After revisiting this course 13 years (and many other courses) later, we found a better appreciation for the creatively of the holes on this adventure style course, with a lot of variety in the holes.  It doesn’t have too much theming on the actual holes (as opposed to its sister-course Aloha which has some) the overall Hawaiian theme persists throughout the course and has more of a “Hawaiian jungle” vibe.  We also have a better appreciation for the “hollow” cups that allow for good drainage after a rainstorm.

This course still ranks as one of our favorite in Myrtle Beach, as well as favorite overall, and it’s definitely worth the play, especially if you’d like to see how you’d do against the best players in the world. 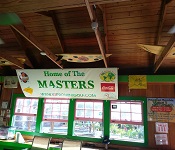 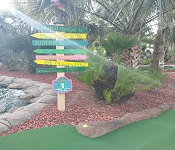 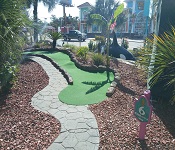 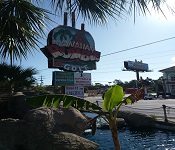 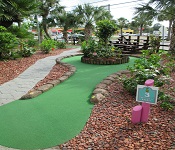 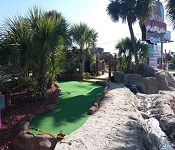 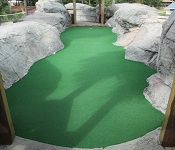 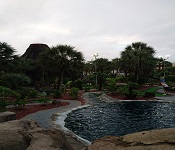 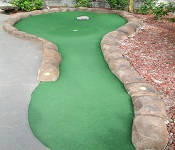 This is the course where "The Masters" championship is held. Course is immaculate and the carpets are smooth. Not terribly "golfy" in that there are a lot of easy holes-in-ones, once you know the line. A few of the late holes are challenging around the pin. Holes were shorter than I would have guessed.

Fun course, very well designed. Greens were kept fresh - only noticed a couple blemishes. They had a nice collection of parrots to check out as you went inside the front entrance. The music playing at the course was fitting, a collection from Jimmy Buffet & Harry Belafonte. We were excited when thunder struck and the volcano erupted which happens every 1/2 hour or so. The course was on many different levels which gave you a great view at the highest one.  There is a turtle and carp pool in the facility in which you could feed with food pellets. The one turtle that came buy wasn’t that interested but they were fun to watch.  I thought 9$ a head was on the high end…but the location & atmosphere made up for it.

Reviewed by Sean and Tony 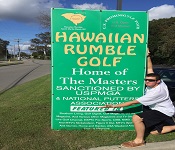 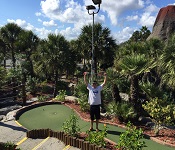 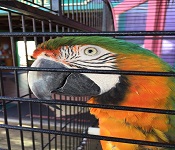