H Street Country Club is a 9-hole miniature golf course located on the second floor of a Mexican restaurant/bar/billiard club.  The course is appropriately themed with obstacles that highlight DC sites, such as the Washington Monument, the Lincoln Memorial, and a special appearance by Marion Barry.  A jukebox is located just off the course.

The cups are a little narrow, and some the holes can be frustrating.  The first hole has a ramp, and once the ball goes up and into it there are three holes that it can come out of.  One of the holes the ball could come out of is out of bounds.  This is not the best design, and it’s certainly a rough way to start a game.  The fourth hole is also frustrating because the cup isn’t in place, and it was necessary for the players to fish their balls out of the hole.  The sixth hole is a new take on a loop-d-loop, however it is poorly executed.  It’s almost impossible to putt the ball in such a way to clear the ramp.  The creepiest hole of all is hole five.  There are zombie versions of some of our more famous presidents.  Throughout the entire course the carpets are really thick.  The ball must be hit rather hard, which can be dangerous if a player is too enthusiastic.

A favorite aspect of the course was the waitress who served drinks while we played.  Despite the frustration on some the holes, overall this course is very enjoyable.  The atmosphere is very relaxed, and no one complained that we took our time playing, acted a little silly, and took a lot of photos.  We also encourage you to stay for a meal at the Mexican restaurant.  The food is quite good and so are the margaritas.  This is a venue more geared for an adult crowd.  H Street Country Club may be a little outside the more touristy area of the city, but it is well worth the trip!

The course has seen a few changes since the first time we played it back in 2009, some for the better and some for the worse.  We played there on a Tuesday night and while the last time there it was daytime, at night the course is pretty dimly lit but after a bit your eyes adjust and it doesn’t make too much of a difference.  We did notice there was a chance in layout in that the ramp hole was moved to second (still with the strange possibility of it being dumped out-of-bounce, which isn’t good because you don’t have too much control in terms of which hole at the top of the ramp it goes into) and the first hole is now a simpler putt between two buildings.  It’s both aceable and not too bad to recover from if you hit a building.  The freeway hole has also been replaced with a set of cars and a train.  Overall this made the course a bit easier (the par did drop by 1) and all of our players were in the 20’s for both rounds we played, with one even coming in under par for one round.

Unfortunately we also noticed that the course had a significant amount of wear in the carpet and in some of the cups.  While it didn’t impact us too much, it was noticeable and there was a couple of shots that would have been better with more favorable conditions.  Also, while everyone was chill on the course we could see things getting a little messy if there were a large crowd as there wasn’t much room to maneuver between the holes and there was some bleeding of one hole into another if you had a bad/weird putt.  Otherwise the theme of the course, ability to bring drinks and general atmosphere of the establishment still managed to keep the atmosphere score quite high.

For all pictures of this course visit our Flickr album. 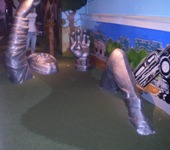 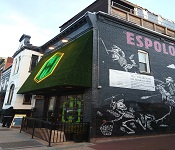 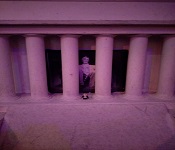 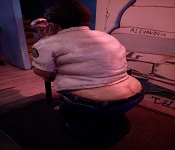