This was our second foray into a library minigolf course and we enjoyed this one a bit better than the first.  This course was also developed by Library Mini Golf and a result it did suffer some of the same drawbacks as the first course we played. This course was much better themed and incorporated a wider variety of obstacles types.  As each hole was sponsored by a local business they got to develop their hole and several of them were very creative. You can say it had everything including the kitchen sink since one creative hole had you putting into one.  However, like the Naugatuck Library course, many of the holes were extremely long and require more whacking as hard as you can versus and sort of skilled putting.

The course was 21 holes long and while it was a little confusing at one point (they didn’t expect as many sponsors so the last few holes didn’t have the right numbers on them), they managed to use the entirety of the library space for the course. With the length of the course it was hard to keep your group together and the strength of the putts often meant a ball would go careening into the library stacks or out a break in the edging. The pars were set appropriately (with most being par 3 -5 like a “big” golf course) but there were a couple of chances for aces along the way. Given the cost and what it’s supporting it was worth the visit and we’d likely play it again if the event was held. 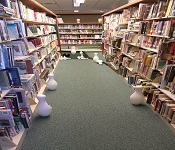 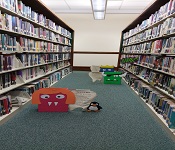 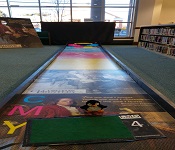 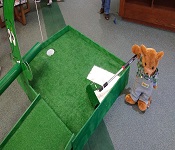 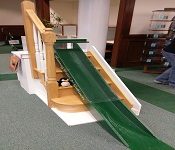 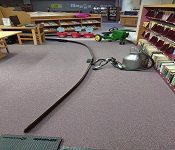 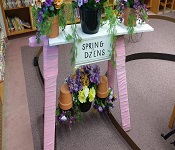