Par: No par on scorecard

This is an entertainment complex that has been around since 1950 with a more recent change in management that is focusing on keeping the place looking good.  There are four minigolf courses at this location (Kings, Queens, Jokers, Camelot) and we only had the chance to play two of them when we were here.  From an overall observation they did seem different enough that it would be worth playing all four if given the chance and they have discounts for multi-round play.  They give you a ticket with the amount of holes you have purchased and you get it punched prior to each rounds, along with picking up a new ball (clubs are located at the beginning of each of the courses). The courses have good music playing throughout and the staff was very friendly.  We were there very early in the day and the gentleman out blowing off the course chatted with us before we even got into the complex, surprised at where we were from (we were in town for a wedding) and giving us some of the history and tips on what to look for on the course.

We played the Kings and Camelot courses and there were some differences between the two but a few commonalities as well.  For the most part the holes were quite creative and distinct from each other. Some of the holes on both courses had “automatic” aces which didn’t necessarily require the ball to go into the final hole.  For example you were rewarded for getting the ball into a tougher hole on a multi-tier hole and instead of trying to filter the ball to the final cup, it just went into a side “ace” spot.  It was a bit different spin on rewards that we didn’t remember seeing used in many other places. The common trend we saw was that while there had been work put into the course (painting, etc) there were some spots where drainage was an issue (we played after some rain the day before) and balls would get stuck in some obstacles or pipes.  Each of the courses also has a similar 19th hole game with an old school ticket machine (though we didn’t get to see it in action since we didn’t win).  There didn’t seem to be a ton of theming consistent with the names of the courses but that didn’t detract much from the overall experience.

We enjoyed playing the Kings course a bit more than Camelot.  It seemed to be in better condition and had more stylistic obstacles.  The Kings course had metal edging and while the holes were lengthy, it wasn’t too hard to get a 2 on most of them with a decent tee shot.  When you add in the automatic aces, you can keep the score in the low 40s or better though most average players will probably see scores a bit close to 50 (there were pars posted on the hole signs but not on the cards since they were interchangeable for all courses – we didn’t take the time to write down all the parts to see what par was considered).  An interesting note is that on the Eiffel Tower hole, the course has placed little people inside the tower’s observation deck including a Gilligan and Skipper (look for them by one of the corners).

The Camelot course was in rougher condition than Kings.  The drainage issues seemed worse here (one hole was almost unplayable) and the carpets were more worn on this course. While it had brick edging, the bricks were actually lined with wood so you didn’t get as solid a kick but it might be more consistent with the flat surface as opposed to the inconsistent brick.  Outside of the construction issues this course did seem to be a tad harder than Kings but a low 40s score is definitely achievable.  The holes were also creative but seemed just a tad less so than on the Kings side with what felt like a little more repetition in style.  However, it did have one of the more creepy obstacles we’ve seen on a course with a moving “putting jester” on the first hole.

In the greater Kansas City area there didn’t seem to be a lot of miniature golf courses so this one is definitely worth the trip (it’s also close to the football stadium if you need a place to go after the game).  The price is also very reasonable, especially when you decide to play more than one course.  Hard to find places to play twice for under $10.  It’s nice to see a complex that has survived almost 70 years and the miniature golf you will find here is definitely in the “classic” style as opposed to the large complexes you might find in Myrtle Beach or Orlando. 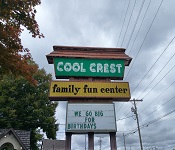 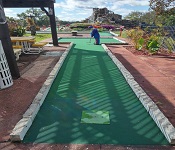 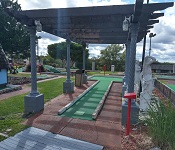 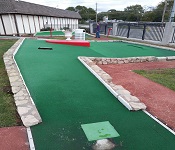 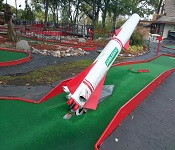 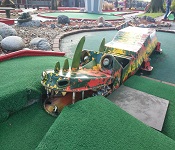 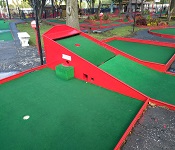 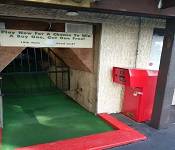 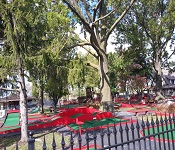