One of the great things about being on Holey Moley was some of the people we got to meet and the friendships we made as a result.  Thanks to one meeting we were introduced to the minigolf course set inside Busby’s bar in LA.  It went sort of like this “Hey do you want to see the minigolf course inside my local bar?” and of course we said yes!  So after a day filled with miniature golf already, we topped it off with a nightcap and a few more strokes of the ball. (You can see A Couple of Putts post about the course here as they were some of our friends who played along with us).

The course was decorated and designed around a mix of (presumably) unlicensed character cut outs from Han Solo and the Star Wars crew through a mix of earth’s mightiest heroes.  There was also plenty of original art and designs, including a classic windmill.  The holes in general were difficult and required some planning for some shots, which had an added layer of challenge with it being blacklight so hard to see all of the angles, etc that they built into it. Perhaps the most interesting hole, other than the ball return hole where you putted into a toilet, was the guitar-shaped hole featuring Elvis.  It was nearly impossible to get it into the smaller upper hole that gave you a better lie but it was a fun hole to play and a cool design. We’re not sure if there were scorecards or pars for the holes as it was the last thing our mind at this point but that doesn’t much impact our evaluation when it comes to free courses.

The course was a little cramped but since we were the only ones on it that evening it wasn’t bad for us.  However, we could see it being a little crazy if you have a lot of people who’ve been enjoying adult beverages trying to play.  If we had to pay for it, it probably would have scored slightly lower on the atmosphere level but since it was free it was a solid rating overall and we’d love to hit it up again if we are ever in the LA area. 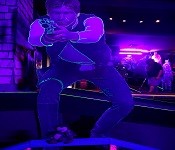 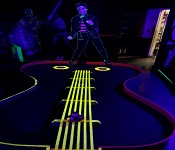 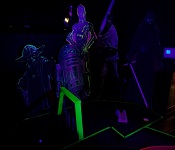 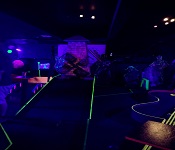 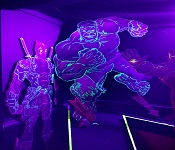 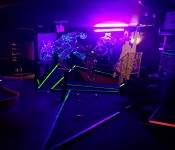